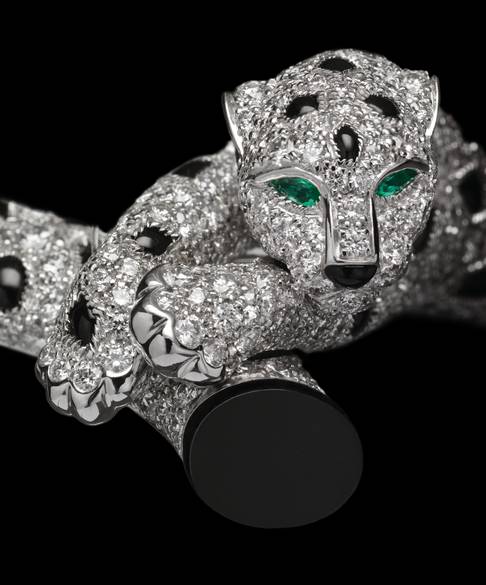 I already briefly touched on the new Panther Collection by Cartier (read my post here), however, the history of this icon is so fascinating and compelling that I feel the need of sharing it with you once more, and more in detail.

Here are they key letters composing the fascinating alphabet which goes and build the story of such an emblem as the Panther is for the Maison Cartier, from its birth to contemporary times.

(All credits to Rouge Cartier for the exceptional and inspiring material. The videos at the end of this posts can be found on Cartier official website, and on YouTube.)

Beginning in 1904, Louis Cartier designed pioneering pieces of jewellery well ahead of its time, characterised by simple and geometric lines and striking colour combinations, notably black and white:

With its majestic sapphire cabochon of 152.35 carats, this brooch was commissioned by the Duchess of Windsor and it is considered to be one of Jeanne Toussaint’s master creations:

This precious cigarette case, a gift from Louis Cartier to Jeanne Toussaint in 1917, was the first Cartier creation to showcase the panther in its full shape:

The same designed has been applied to this Panther Vanity Case, 1928:

In 1931, Cartier designed a bracelet and necklace for heiress and fashion icon Daisy Fellowes. The creations evoked a panther’s coat in rubies and pearls, fully in line with Fellowes’ bold personality:

At the end of the 19th century, cosmopolitan Europeans returning from Asia and Africa began to influence the world. Looking ahead and acting as an authentic “trendsetter”, Cartier began to enhance his pieces with touches of the exotic.

In 1914, Louis Cartier commissioned French illustrator George Barbier to draw a “Lady with a Panther”, to be later used in advertising. Since then, the black panther has emerged as a more sensual, mysterious, and dangerous creature.

At the turn of the century, Jeanne Toussaint and Louis Cartier were two of the very few privileged Europeans to embark on safaris in Africa. After a journey to Kenya, Toussaint developed a passion for the panther and encouraged its adaptation into jewellery.

The panther has appeared in various forms and poses throughout its history, designed realistically, graphically or as a mere inspiration. Here are some examples:

After joining Cartier in 1918, she became known as “La Panthère” for her unique style and captivating personality.

Louis Cartier appointed Jeanne Toussaint as Artistic Director of High Jewellery in 1933, as he had been imparting his vision and knowledge since the 1920s.

For her wedding in 1958, Princess Nina Aga Khan received this jewellery set, which is among the most spectacular and naturalistic three-dimensional pieces ever created:

Known as “the Mexican Panther”, in 1967 the actress commissioned a two-headed panther bracelet with articulated head and paws:

Since its very beginning, onyx is used to simulate the panther’s coat in all jewellery creations.

This 1914 watch with a panther motif was the first Cartier creation to directly refer to the feline.

A curious anecdote for the letter “Q”, about Juliette Greco who, in the 1970s, used to sing a song titled “La Panthère”, often wearing a Cartier panther brooch on her right shoulder, as it can be seen in the picture below:

The first Panther ring was created in 1935, combining for the first time black enamel with yellow gold:

In 1948, the Duke of Windsor provided Cartier with an exceptional emerald, which was transformed in the first three-dimensional panther brooch, for Wallis Simpson Duchess of Windsor:

The panther is the sole protagonist of magnificent watches and high jewellery watches collections, in all the variations of gold and precious stones:

In 1982, the Udaïpur set introduced a more docile panther. With its detachable brooch, it had a very well deserved place in Cartier’s transformable jewellery. You will notice the necklace in this video, from the official Cartier website:

Truly timeless, the Panther keeps on fascinating us and on leaving a mark in our imagination. Here is Panthère de Cartier new collection in the Maison’s press campaign gallery:

7 comments on “The history of an Icon: Cartier’s Panthère”