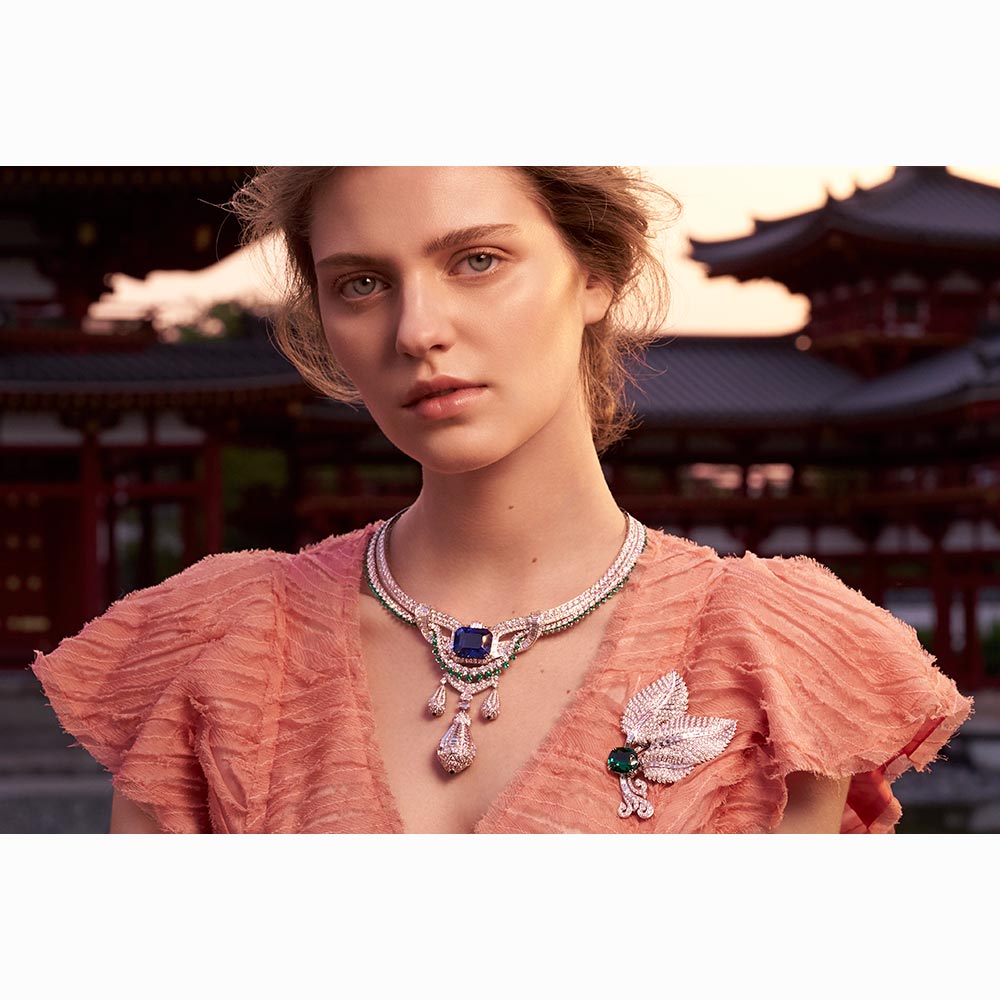 Van Cleef & Arpels unveils a secret – with precious and personal talismans, that become the protagonists of its new High Jewellery collection, Le Secret.

More than one-hundred unique creations, that interpret the theme of the secret, personal and cherished, and render it in creative and surprising ways.

Hidden messages, labyrinthine paths, rebuses to be deciphered and unexpected metamorphosis go hand in hand with famous quotes by poets and philosophers, such as Plato, Oscar Wilde and Balzac – such as in the Fleur Bleue ring, where the upper part rotates to reveal a quote by Oscar Wilde, set in gold: “Une vie sans amour est comme un jardin sans soleil” (A life without love is like a sunless garden).

Or like in the Métamorphose du Cygne brooch, in which a story inspired by Alexandre Pouchkine comes to life, with a princess being turned into a swan.

When the back of the piece is rotated, the metamorphosis actually takes place: the torso of the young woman disappears, replaced by an elegant swan floating on the water. The two tableaux succeed one another, as if by magic.

Various details prolong the enchantment: the finesse of the feminine silhouette, set with a rose-cut diamond, the sapphires’ subtle gradation of shades – from light blue to mauve – and the piece’s generous dimensions all bestow it with a striking presence, like an apparition.

In the Le Secret high jewellery collection, the necklaces are the most surprising pieces – transformable jewels that can be interpreted in so many ways.

The Pégase Necklace is an exceptional creation, centred all around an equally exceptional sapphire of 45.10 carats from Sri Lanka.

Harboring a hidden symbol and an exceptional center stone, this transformable necklace blends the High Jewellery tradition with a playful touch of surprise.

Hidden within the central pendant is a miniature figurine in white gold, depicting Pegasus – a figurine that can be kept secret, revealed to the world or suspended from a clip, along with two other detachable pendants.

In its center, the necklace gives pride of place to a 45.10-carat sapphire from Sri Lanka, a generous Pierre de Caractère™ that commands admiration for the quality of its crystallisation and its intense “royal blue”, characteristic of the old mines.

From the stone selection to the crafting of the diamonds in situ, from the wax model of Pegasus to the intertwined lines of the necklace, this creation brings together High Jewellery’s most virtuoso savoir-faire. A feat accomplished by the Mains d’Or over more than 2200 hours at Van Cleef & Arpels’ workshops in Place Vendôme.

Inspired by Hans Christian Andersen’s story The Nightingale, this transformable long necklace (or sautoir) contains a bird nestling at its heart, artfully hidden in the central jewellery motif.

A diamond door slides open to reveal a carved nightingale against a background of sapphires and buff-topped emeralds.

This art of metamorphosis also finds expression in the piece itself, which can be worn in three different ways: one long and two short.

The various configurations give free rein to an ensemble of colors and motifs evoking Asia. The association of onyx, cultured pearls and emeralds underscores the rich red of the Burmese ruby beads. The traditional graduated stringing technique showcases the varying dimensions and charm of these antique materials, weighing a total of 567.14 carats.

When it comes to High Jewellery Watches, thinking about the collection’s driving theme, it cannot but be a secret watch – the Papillon Secret Watch.

Butterflies – a source of inspiration for the Maison since the 1920s – propose a game of hide and seek. Beneath its lower wings, one of them hides a mother-of-pearl dial that can be revealed with the fingertips. The time is read like a secret, in a swarm of emeralds, black spinels and diamonds.

At the center, the eye is drawn to an superb Colombian emerald weighing 14.57 carats. Its antique material invites the onlooker to plunge into the heart of the stone, while its emerald cut accentuates the graphic aspect of the piece. In a symmetry that echoes butterfly wings, shades of black and dark green – combined with the sparkle of diamonds of various cuts – recreate all the beauty of life.

Last but not the least, when it comes to bracelets, it is all about the Coeurs Enlacés Bracelet – a three-time masterpiece.

Highly transformable, this creation offers a wealth of wearing possibilities, with its two detachable clips covering a motif of enlaced hearts. Inspired by the Shrivatsa symbol – depicting an infinite knot – these interlaced lines evoke a hidden love, shared beyond prying eyes.

The piece’s emotional meaning is underlined by its subtle gradation of tones, from pink to white. On the first clip, diamonds, yellow and pink sapphires, rubies and spessartite garnets form joyful circles around three carefully matched pink spinels, weighing a total of 31.17 carats.

To suit the mood, this flamboyant ornament can make way for a sparkling rosette whose diamonds radiate on several levels, in an interplay of cuts and light. On both the clips and the bracelet, the spectacle continues on the rear: the delicacy of the backgrounds, openwork and articulations develops the theme of a secret, cherished and preserved against the skin.

From flaming red rubies down to the gentle tones of mauve sapphires, everything whispers a confidence revealed with ingenuity, thanks to the artisanal craftsmanship of Van Cleef’s masters – a virtuoso savoir-faire that makes one forget about the hours spent on the bench in the favour of pure beauty, of wonder and emotion, expressed in the most surprising and sophisticated manner.

Le Secret by Van Cleef & Arpels is a collection endowed with the lively playful spirit of transformable jewels able to re-enact the enchantment and to narrate, with a renewed tone,  the poetry of High Jewellery. CC