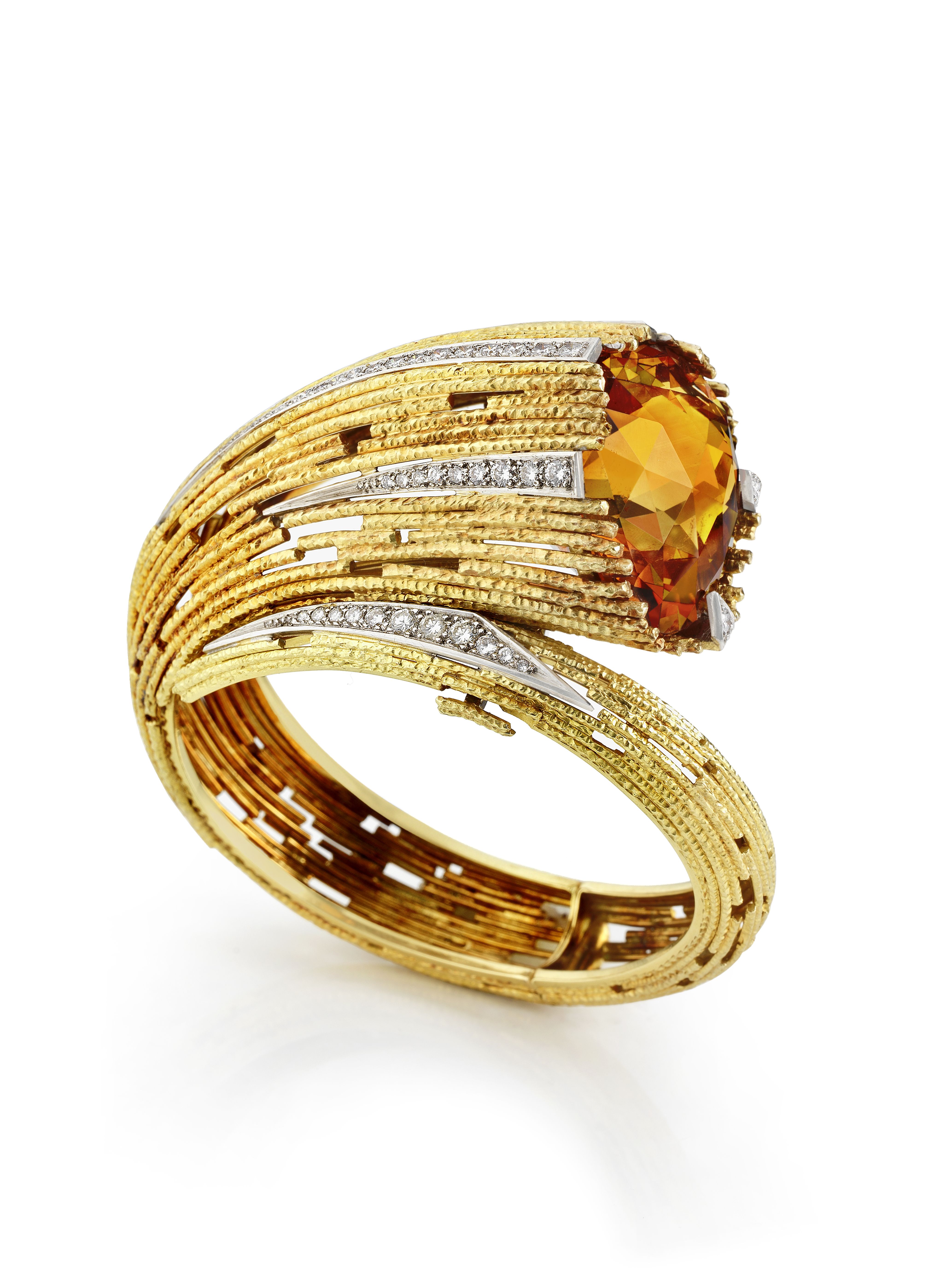 The largest private collection of jewels signed Andrew Grima will go under the hammer ad Bonhams, London, on September 20th.

The collection will be presented during Bonhams’ Fine Jewellery sale, and it will feature 55 pieces of signed jewellery by Andrew Grima – among which some of his earliest jewels, created in London during the Sixties, and more that span from the 1970s through the Nineties until those released before his death in 2007.

Andrew Grima was a jeweller appreciated by royals, celebrities, socialites and artists throughout the Swinging Sixties and Seventies, with his earliest clients including HM The Queen, The Princess Margaret, Jackie Kennedy Onassis and Ursula Andress. Today, collectors of his work include fashion designers Marc Jacobs and Miuccia Prada.

Here is a very interesting video, released by Bonhams, giving a compelling historical retrospective on Andrew Grima and his work.

Grima’s groundbreaking designs, which drew inspiration from art, sculpture and the natural world, injected great originality and glamour into what had become a stagnant jewellery scene in post-war Britain.

He created bold and unusual jewels whose value lay in their aesthetic composition rather than just in the carat weight of expensive diamonds and precious gems. He is recognised as one of the great modernist jewellery designers of the 20th century and his pieces are highly sought after worldwide.

In the words of Emily Barber, Department Director, Bonhams Jewellery:

“Andrew Grima’s work is distinct in terms of its design, quality and originality. He was essentially an artist whose medium happened to be jewellery. His designs capture the spirit of each era in which he worked yet are still immensely wearable and contemporary today. Each lot in this sale reveals the diversity and creativity of his work.”

“Collectors of Andrew Grima’s designs consider them as miniature artworks. They are drawn to Grima’s work because of its bold, cutting-edge design and the fact that his pieces were often unique. We anticipate strong interest in this collection given it is one of the most significant and comprehensive private collections of jewels by Grima ever to come to auction.”

Adding on, Andrew Grima’s daughter, Francesca, who visited Bonhams ahead of the sale, commented:

“It’s wonderful to see such a truly magnificent collection of my father’s designs in one place. Through his flamboyant and organic designs, he was able to take rough stones in their natural state and create larger pieces which where both exciting and out of the ordinary. His use of textured gold and of unconventional stones such as tourmalines, opals, citrine, green beryl and topaz allowed him to create the type of jewellery that had not been seen before; the type of jewellery that people noticed and admired and still do to this day.”

Highlights include pieces from his admired “About Time” watch collection for Omega, one of the most innovative collections of watches ever made, as well as works from the “Rock Revival” collection in that incorporated large, uncut and unusual gemstone crystals.

Omega approached Grima in October 1968 to create a series of watches and timepieces, ending up with an original list of 55 watches and 31 matching jewels. The revolution introduced by Grima, and applied to the “About Time” collection for Omega, was in the use of a gemstone as the watch “glass” whereby the wearer would see time through a gem. The collection launches in 1970 in London and within days sold out (with each watch taking a minimum of six weeks to four months to manufacture).

About this stunning necklace: Andrew Grima’s engineering background and imagination led him to invent this unique way of creating jewellery using gold textured wire, a technique that today is widely known as Grima’s signature design. This technique allowed him to achieve a sense of lightness and movement. At first appearing to be rigid in design, its thousands of wires and hidden hinges, gave the necklace the flexibility to embrace the wearer. Achieving this result required unique skills which only a handful of goldsmiths mastered. Each wire had to be soldered to the next and numerous hinges were then discreetly integrated into the back.

This last necklace was a particular favourite of the collection’s current owner, who prefers to remain anonymous: “Whenever I wore black and white or simply black or white, it dressed an outfit in a way nothing else could. In fact, I often planned outfits around it. And every Grima piece – no matter what the competition – was always universally admired when worn.”

By looking at his exceptional creations, it is easy to understand how, today, Andrew Grima is recognised as one of the great modernist jewellery designers of the 20th century; perhaps the most influential of the post-war period.

His work can be seen in the collections of the Victoria & Albert Museum and the Worshipful Company of Goldsmiths. CC

2 comments on “Auctions: the largest Private Collection of Andrew Grima Jewellery comes to Auction at Bonhams”