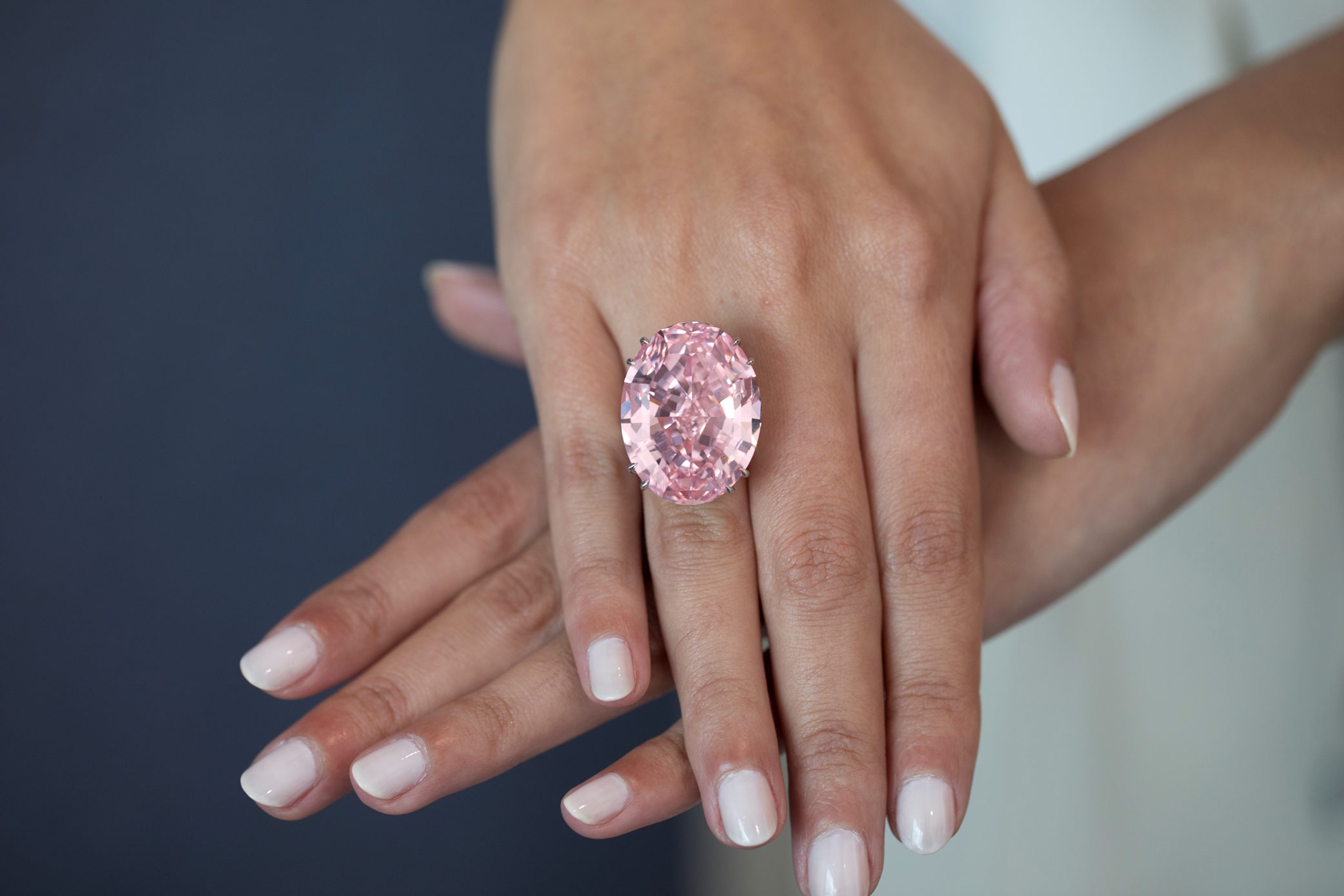 Today, Sotheby’s announced that one of the greatest natural treasures on earth will be back to auction. The Pink Star, the largest Internally Flawless Fancy Vivid Pink Diamond ever graded by GIA (59.60 carats), and estimated in excess of US$60 Million, will lead Sotheby’s Hong Kong Magnificent Jewels and Jadeite, next April 4th.

This announcement comes at a time of high demand for coloured diamonds, and this extraordinary gem, that is twice the size of the Graff Pink (a 24.78-carat Fancy Intense Pink diamond currently holding the world auction record for any pink diamond and for any diamond with its US$ 46.2 million) will for sure attract the greatest interest and attention during the sale.

The Pink Star received the highest colour and clarity grades from GIA, and it belongs to the Type IIa group of gemstones – a subgroup to which only 2% of all gem diamonds belong.

Those stones belonging to the Type IIa group are chemically the purest of all diamond crystals, often having the greatest optical transparency.

The 132.5-carat rough was mined by De Beers in Africa in 1999, cut and polished by Steinmetz Diamonds for almost two years, and transformed into the extraordinary stone we admire today.

As per GIA’s letter issued last April 2016, the Pink Star is the largest Flawless or Internally Flawless, Fancy Vivid Pink, Natural Colour diamond they have graded.

“Over the years Sotheby’s Hong Kong has played host to many outstanding stones and sales; including the 118.28-carat oval D-colour flawless diamond sold in October 2013, the still current world auction record for any white diamond, as well as the fancy vivid blue 10.10-carat De Beers Millennium Jewel 4 which set a record for any jewel sold at auction in Asia in April 2016.

The diamond was first unveiled to the public in May 2003 as the Steinmetz Pink. Writing in the Financial Times on the 31 May 2003, Mike Duff described the diamond as “the rarest, finest, most precious stone the world has ever seen”.

The stone was first sold in 2007 and was subsequently renamed “The Pink Star”. In the same article, Tom Moses, Executive Vice President and Chief Laboratory and Research Officer of the GIA, is quoted as saying: “it’s our experience that large polished pink diamonds – over ten carats – very rarely occur with an intense colour… The GIA Laboratory has been issuing grading reports for 50 years and this is the largest pink diamond with this depth of colour [vivid pink] that we have ever characterised”. CC

The Pink Star is a true masterpiece of nature, beyond characterisation with human vocabulary. – GIA Monograph written for the Pink Star, 2013

All material courtesy of Sotheby’s