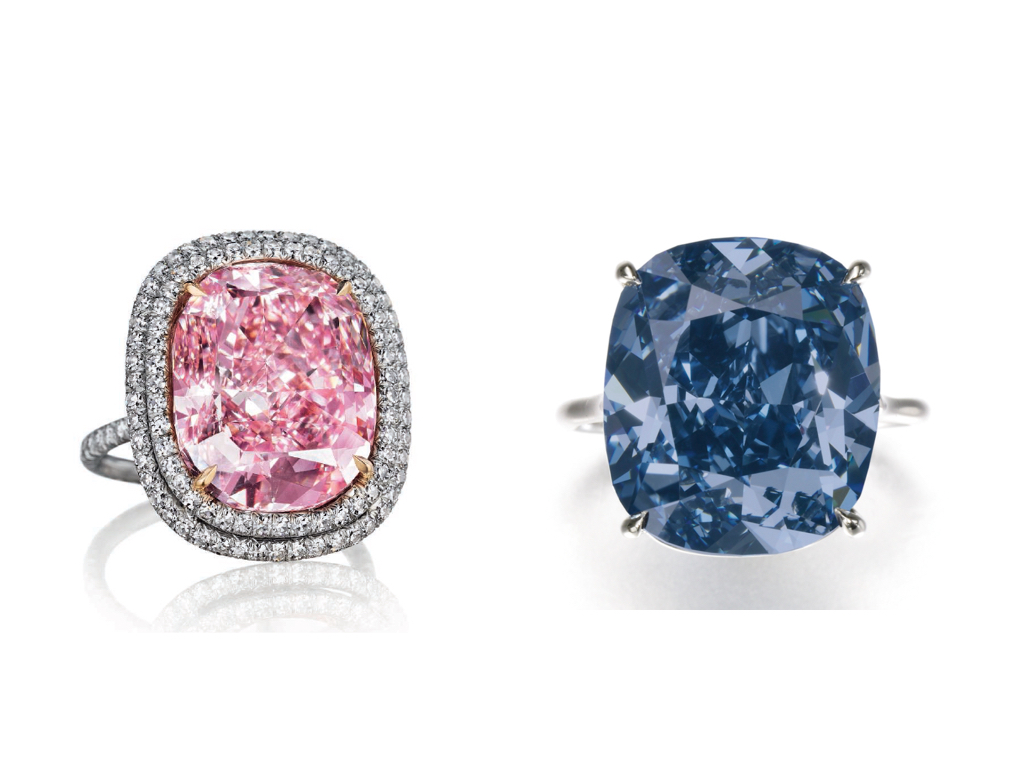 Two of the most important events of the Autumnal auction season, presenting two of the most incredible diamonds ever seen. Meet The Pink and The Blue Moon.

The Pink has been announced by Christie’s as the largest cushion-shaped Fancy Vivid Pink diamond to be offered for sale at auction.

A true extraordinary jewel, mounted as a ring, with a double row of pavé-set white diamonds which surround and highlight the main stone, with a delicate third row of small pink diamonds underneath.

In the realm of natural colored diamonds, those of a distinct pink hue are the most sought-after among gem connoisseurs. While most pink diamonds exhibit a color modifier like purple, orange, brown or grey, the 16.08 carat diamond to be offered at Christie’s shows absolutely no trace of a secondary color, making it exceedingly rare and attractive.

In addition the 16.08 carat Fancy Vivid Pink diamond classifies as a Type IIa diamond, which contains little if any nitrogen and accounts for less than 2 percent of all gem diamonds. The stone’s even color distribution, combined with a balanced saturation and tone and straight pink hue, qualify the 16.08 carat pink for the coveted ‘Fancy Vivid’ color grading from the Gemological Institute of America (GIA). That only one in one hundred thousand diamonds possesses a color deep enough to qualify as ‘Fancy’ underscores its absolute rarity.

An historic level was reached in the international diamond market in December 2009 when Christie’s Hong Kong sold The Vivid Pink, a cushion-shaped fancy vivid pink diamond of 5.00 carats for U$2,155,332 per carat, setting a new per-carat record price for any pink diamond.

Since that time, per-carat prices for top-quality pink diamonds have continued on a steady upward climb. Among the major pink diamonds that have set new auction benchmarks in price over the last five years, Christie’s has sold The Princie Diamond, a cushion-shaped fancy intense pink diamond of 34.65 carats for $39.3 million;

The ‘Perfect Pink’, a rectangular-cut fancy intense pink diamond of 14.23 carats for $23.2 million; and

Some of the world’s most famous and historic gems are pink diamonds, including the ‘Darya-i-Nur’ of approximately 182 carats, part of the Iranian Crown Jewels; the ‘Hortensia’ of 20.53 carats, formerly part of the Crown Jewels of France and today to be admired at the Louvre; and the ‘Williamson’ of 23.60 carats, belonging to Her Majesty the Queen of England.

The Blue Moon Diamond is a true marvel, proof of the powerful beauty that is created when nature and human ingenuity work together harmoniously. Internally flawless, the Blue Moon has been christened “one of the rarest gems in the world”, and the GIA has declared that its Fancy Vivid hue might be so unique as to be indescribable, as you can see in this video.

As a matter of fact, The Blue Moon Diamond’s name refers to the expression ‘once in a blue moon’, which is used to describe something which happens only extremely rarely. In fact, blue diamonds only account for a minute fraction of the diamonds unearthed in a diamond mine.

This is also why Scientists from the National Gem and Mineral Collection at the Smithsonian Institution were fascinated by the extreme rarity of the Blue Moon. They were able to study the diamond ahead of its being exhibited in the Gem Vault of the Natural History Museum of Los Angeles County. It has been reported that, under testing, they observed that the colour of the Blue Moon is “true and saturated” throughout the diamond, with no other colours present. Dr Eloïse Gaillou, Mineral and Gem Curator at the Natural History Museum of Los Angeles County, noted the “intense ocean blue color” and placed the Blue Moon “on the top of the rare list due to its color, clarity and size”.

Here is another very interesting and unveiling video by Sotheby’s:

The Blue Moon Diamond, presented by Sotheby’s, is among the largest known fancy vivid blue diamonds, which will be the centrepiece of the auction of Magnificent Jewels and Noble Jewels in Geneva on 11 November 2015. This exquisite diamond weighs 12.03 carats and has been graded Fancy Vivid Blue – the highest possible colour grading for blue diamonds – by the Gemological Institute of America (GIA). The cushion brilliant-cut stone also boasts exceptional clarity, having been declared Internally Flawless by the GIA. This stunningly rare diamond comes to the market with an estimate of US$ 35-55 million.

“The tremendous excitement last year over the discovery of a 29.62-carat blue rough diamond at the Cullinan mine in South Africa has now been proved to have been totally justified. Weighing in at 12.03 carats, the ‘Blue Moon’ diamond is a simply sensational stone of perfect colour and purity, combined with a superb cushion shape. Blue, for me, is the most mysterious and magical of all the colours of diamond, and the Blue Moon will now take its place among the most famous gems in the world.”

According to the GIA Monograph, the hue of the Blue Moon diamond is

“likely to have never before been seen within such a large diamond, or any gemstone”,

“could be indescribable to even the most experienced diamantaire or colour theorist; some, however, liken it to the ocean”.

True marvels of Nature, these two extraordinary diamonds leave us speechless, while speaking of the power of the natural forces and of the immense treasures they can gift the humankind with. CC

Post by Claudia Carletti, Jewellery Through Time. All material courtesy of Christie’s and Sotheby’s.

2 comments on “Important Diamonds: The Pink and The Blue Moon”