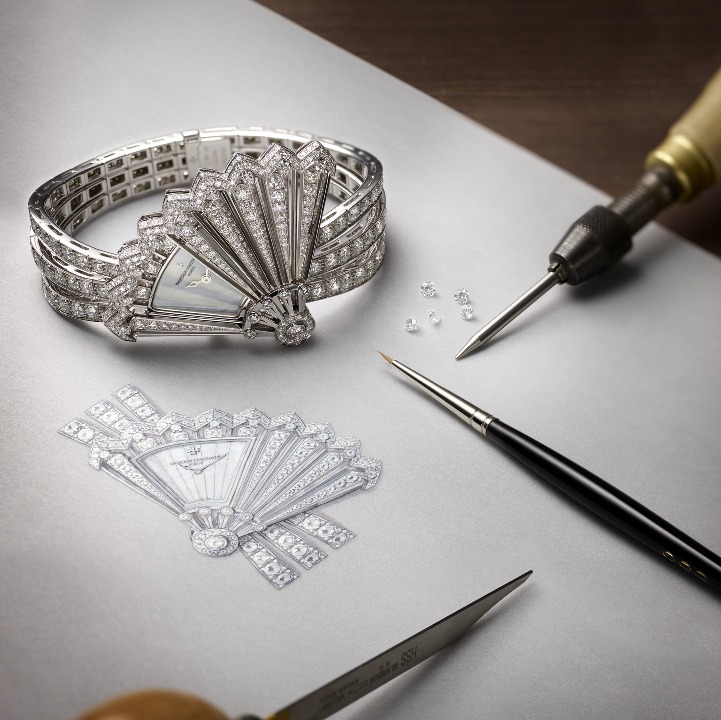 On the occasion of Watches and Wonders 2015, that is taking place in Hong Kong these days, Vacheron Constantin is unveiling many a treasure. Among those, for sure the Heures Créatives Collection is the one which captured my imagination. Heure Romantique, Heure Discrète and Heure Audacieuse do form a stunning trilogy dedicated to very different feminine publics, yet united by the same vision of elegance.

A collection which originates from Vacheron Constantin’s heritage models, that are conceptualised and reinterpreted in the most contemporary way. Expansive, confidential or playful interpretations, all offering 18-carat white gold watches exclusively set with diamonds and powered by the mechanical hand-wound movement, Caliber 1055.

The Heure Romantique watch is intimately linked to the Art Nouveau movement, whose mission was to advocate a return to Nature as opposite to the intense industrialisation of the beginning of the 20th century.

This return to Nature materialised itself through undulating shapes, swirls and arabesques. The elegant and inventive women of this era took then refuge in a voluptuous romanticism, and the Heure Romantique watch is inspired by this delicate trend.

Crafted in 18-carat white gold and adorned with 104 round-cut diamonds (approximately 2.5 cts), the case creates a ripple around a mother-of-pearl dial. Four diamond-set lugs deliciously accentuate the smooth contours of a lightly cambered case punctuated by a winding crown enhanced with a diamond.

Inspired by a model highly emblematic of the Belle Epoque and dating from 1916, this reinterpretation looses all superfluity and retains only its quintessential elegant roundness.

This exceptional timepiece is worn on a black satin strap, secured by a white gold gemset folding clasp.

The virtuoso of the Manufacture’s Master Jewellers reaches its highest levels with the Heure Romantique versions entirely paved with round-cut or baguette-cut diamonds. True marvels.

This is undoubtely the model which captured my imagination. The creative input is superb, and the execution simply excellent and fascinating.

This is Heure Discrète, which geometric symmetry and clean lines are a clear heritage of the Art Deco, the most appropriate reaction to the contortions of Art Nouveau. This model’s design is inspired by the fan, a very important accessory at the time.

This model already appeared in 1919 in the form of a pendant, and it is today reinterpreted as an utterly modern “secret” wristwatch:

Heure Discrète is illuminated by 286 diamonds. The fan is sculpted from white gold, fashioned like guipure lace and then swathed in precious stones accentuating its symmetry. It pivots to reveal a window of delicately textured white mother-of-pearl swept over by two hands. Heure Discrète is worn on a black satin strap for an air of elegant sobriety. The sparkling version is extended by three undulating white gold ribbons, set with nearly 11 carats of diamonds. Lavish radiance in pure Art Deco spirit.

The most avant-garde of the three models, this Heure Audacieuse timepiece breaks all rules by turning the belt into a precious cuff watch: an unexpected stylistic expression offered by Vacheron Constantin in 1970 and that has been transcended this year by magnifying the dimensions while curving its dynamics.

The buckle, which doubles as a case, sparkles with round diamonds in a snow setting, a specific technique which juxtaposes stones of varying diameters. Nestled one against the other, they form a subtle shimmering blanket across the entire white gold surface. The winding crown is concealed beneath the black satin strap whose colour echoes that of the satin-finish dial.

The Heure Audacieuse model is also available in a precious version with 172 invisibly set baguette-cut diamonds totalling approximately 11.20 carats, accentuating the modernity of the design.

The Heure Audacieuse cuff watch is designed for a self-assured woman willing to proclaim her distinctive personality and her independence.

Three models driven by a movement with pure, uncluttered technical content, and entirely focused on aesthetics so as to ensure that the magic weaves its unique spell. CC