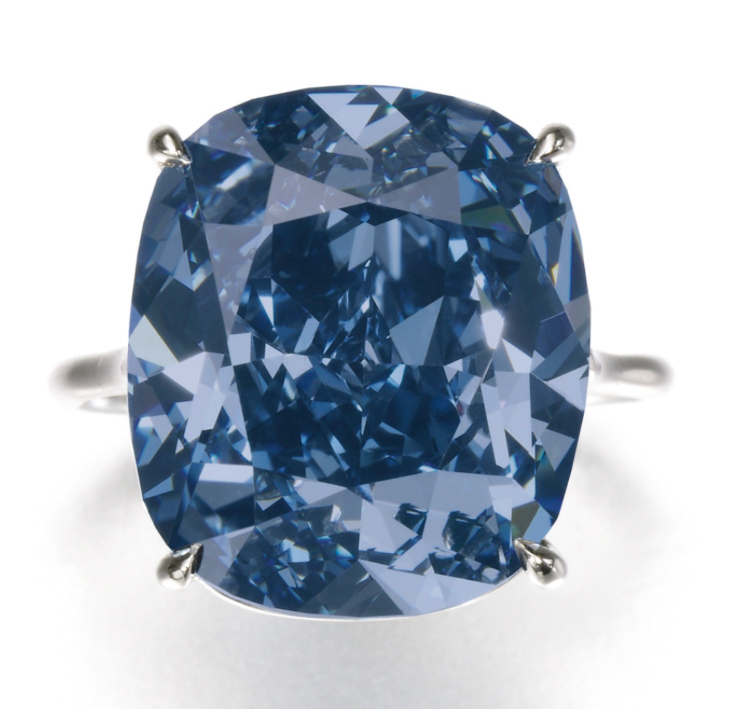 What a night it must have been yesterday night! The hammer went down, at Sotheby’s Geneva, to mark a new world record for the sale of a coloured diamond. The Blue Moon, a 12.03 carat cushion-shaped, Fancy Vivid Blue Diamond, was sold for a sensational $48,468,158 ($4,028,941 per carat; estimate was $35-55m).  A new world record marked for price-per-carat, for any diamond of any colour, for any gemstone, or any jewel. A true milestone in auction’s history.

Also The Blue Moon, like The Pink (sold during Christie’s Geneva Magnificent Jewels auction on November 10 to a Hong Kong private buyer, and now known as ‘Sweet Josephine’), has been christened with a new name, which also has the name ‘Josephine’ in it: ‘The Blue Moon of Josephine’… Who knows, it might be the same private collector, in which case this lady named Josephine is for sure a very privileged and cherished person, having received two of those diamonds ranking among the greatest gems in the whole world.

Discover The Blue Moon of Josephine in this video.

Going back to the books, let us remember that the prior auction record for any diamond was held by The Graff Pink (24.78 carats) which was sold for $46.2 million at Sotheby’s Geneva in 2010, and here described by David Bennett, Sotheby’s Worldwide Chairman of Jewellery:

Another important diamond, The Zoe Diamond ($3,348,205 per carat), set the benchmark for the auction record price-per-carat for any diamond and gemstone: a record equally smashed by The Blue Moon of Josephine‘s exceptional result.

Again on The Blue Moon of Josephine, Mr Bennet says:

I am absolutely delighted with this evening’s record result – this show-stopping blue diamond surely is a once-in-a-lifetime stone. I’m also pleased to say that tonight’s sale takeout total in Geneva for this year to an unprecedented 300 million dollars, following our record-breaking sales in May. The star of the evening, the ‘Blue Moon of Josephine’ was discovered at the Cullinan Mine, which is owned by Petra Diamonds, and was polished to perfection by Cora International. It now takes its place among the world’s greatest diamonds.

WORLD AUCTION RECORD FOR A FANCY ORANGY PINK DIAMOND. From the collection of Sir Sean Connery, this sublime fancy orange-pink diamond pendant, weighing 15.20 carats and boasting VS2 US4 Clarity, was sold for $4,044,162 ($266,063 per carat) to International Trade.

Very fine sapphire and diamond ring. Set with a cushion-shaped sapphire weighing 40.13 carats, within a surround of marquise-shaped diamonds. Accompanied by SSEF report no. 82356 and Gübelin report no. 9810043, dated 14 October 1998, each stating that the sapphire is of Burmese origin, with no indications of heating, ‘royal blue’ colour; together with an appendix letter expressing the quality and the rarity of the stone, and a Gübelin report.

A fancy vivid yellow diamond ring, set with a tep-cut fancy vivid yellow diamond weighing 22.43 carats, between two similarly cut diamonds weighing 4.09 and 4.13 carats. Accompanied by GIA report no. 1176238839, stating that the central diamond is Fancy Vivid Yellow, Natural Colour, VS2 Clarity, and GIA report no. 5172238876 and no. 2175238872, stating that the side diamonds are both E Colour, VVS2 Clarity.

More highlights include two tiaras with noble provenance: a pearl and diamond Cartier tiara, saved from the sinking of the Lusitania in 1915 sold for US$799,265. Once part of the jewellery collection of Lady Marguerite Allan (1873-1957), the tiara was among the jewels she took on board the ill-fated ship. Lady Allan survived the disaster, as did the tiara, and remained in the family.

And a striking tiara by Cartier made of steel and diamonds totalled US$536,165:

Last but not the least, three captivating pairs of ear clips by JAR, saw strong prices yesterday night. They were led by a pair of bombé design ear clips, featuring two sugarloaf cabochon sapphires within a mount pavé-set with diamonds, that sold for US$584,002: