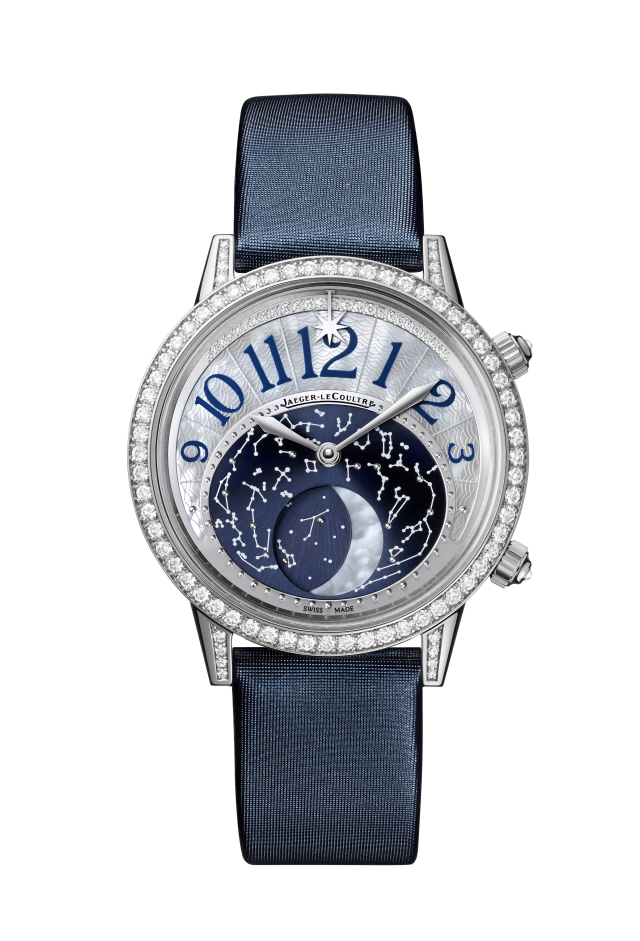 Endowed with its powerful and beautifully staged moon-phase display, the Rendez-Vous Moon of Jaeger-LeCoultre extends an enticing invitation to follow the guidance of the most feminine of celestial bodies.

A symbol of time, the moon is the hourglass of water tides and of our biological clocks. It is also an emblem of womanhood, which fertile, maternal image nurtures our imagination. Others choose to see in it only the hidden, dark side. However, when positioned directly opposite to the sun that lights it up entirely, the moon shines with a benevolent radiance, illuminating the night with its full, glowing roundness, with its quarters serving to cultivate the mysterious aspects of its nature.

All eyes on a stellar complication
Having in mind women who are drawn to the beauty of our universe, Jaeger-LeCoultre has designed and developed a new model for its iconic feminine line. It has chosen to equip it with moon phases, a traditional watchmaking complication that finds a new form of aesthetic expression in the Rendez-Vous Moon.

Moon phases play the starring role, exuding an exceptionally powerful presence on this model. Generously proportioned and more radiant than ever, the display is a vivid revealation of the creative freedom that drives the Grande Maison. As the days and nights slip by, the moon shares its precious information with the woman who wears the Rendez-Vous Moon: each and every step in its cycle can be experienced live. One may choose to take account of lunar indications, or not, but one thing is for sure: the moon phase is to watchmaking what haute couture is to fashion: remarkable and thus essential.

This horological complication is endowed with a degree of precision such as to testify to Jaeger-LeCoultre’s strong commitment to the development of its new movement: while a classic moon phase shows a one-day deviation every two and a half years, the Rendez-Vous Moon is destined to remain accurate for 972 years – an eternity by human standards.

Subtle equilibrium of technical and aesthetic elements
In this new creation, the pursuit of harmony was more relevant than ever, the aim being to preserve the expressive and distinctive characteristics of the Rendez-Vous line, whilst giving the moon a space commensurate with its decisive role in setting the cadence of our lives.
A sharp eye will immediately note that the crescent of the Rendez-Vous Moon bears a stylised hours arc distinguished by elongated numerals. It tops a disc affording a captivating vision of the heavenly canopy and occupies almost half the dial. The deep blue sky reveals the constellations and shines with a sprinkling of sparkling diamonds.

All this concurs to reaching a spirit of perfect equity, in which technical and aesthetic elements play an equally important part.

A luminous mantle
Mother-of-pearl,  symbolically associated with a variety of feminine, soothing and sometimes even protective virtues, was the natural choice to adorn the moon disc. Its colour and the shimmering iridescence vary from one type of mother-of-pearl to the other, but its emotional impact remains unchanged.

Diamonds also take part in this celebration of light, since gem-setting is one of Jaeger-LeCoultre’s master skills. On the white gold model, the gem-setting creates a beaming circle of light both above and all around the watch. It is subtly modified in step with wrist movements. The two crowns are each set with an inverted diamond. One serves to adjust the time and the moon phase. The other guides the moving star serving to personalise time. Sparkling on the chapter ring at the precise time chosen by the wearer, it represents a real-life or secret rendez-vous that is truly hers alone. A delicate detail indeed.

Two sizes, two expressions of seductive appeal
Jaeger-LeCoultre has opted to provide two versions of this new model, in 36 and 39 mm diameters. They share several characteristics, and both versions come on a blue satin strap.