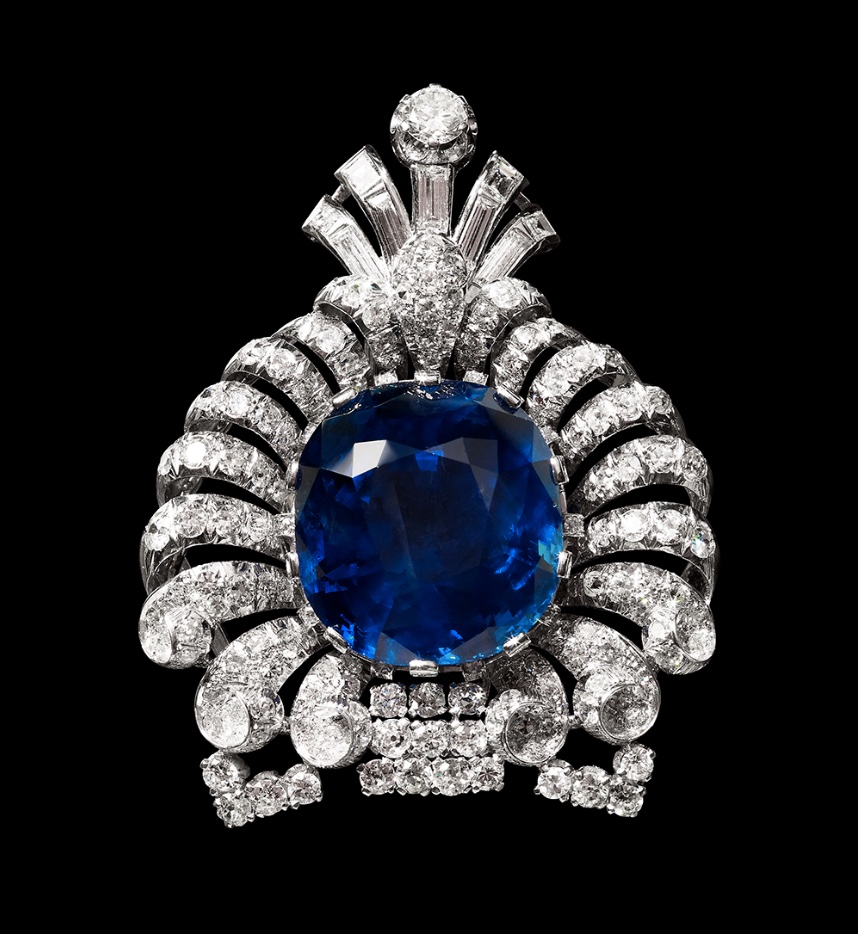 For the first time in Italy, fabulous XVI-XX century Indian jewels and gems arrive in Venice with the Treasures of the Mughals and the Maharajas: The Al Thani Collection exhibition.

Promoted by Fondazione Musei Civici di Venezia and presented against a stunning and ethereal backdrop in the Doge’s Palace, Venice, the exhibition Treasures of the Mughals and of the Maharajas – The Al Thani Collection will give the Italian public the first-ever opportunity to admire nearly 300 pieces from the precious collection assembled by His Highness Sheikh Hamad bin Abdullah Al Thani, a member of the Qatari Royal Family.

Splendid gems, precious stones, old and legendary jewels, together with contemporary creations, take on a journey through five centuries of pure beauty and undisputed artisanal excellence, sign of the glorious Indian tradition: from Genghis Khan and Tamerlane’s descendants to the great Maharajas who, in the XX century, commissioned exquisite and extraordinary jewels to the most important European jewellery Maisons, and to Cartier in particular.

The curators of the exhibition are Amin Jaffer, Senior Curator of The Al Thani Collection, and distinguished Italian scholar of East Asian art Gian Carlo Calza; Gabriella Belli has been appointed the academic director.

From Golconda diamonds to beautiful Badakhshan spinels and the enchanting hues of Kashmir sapphires, together with rubies from Ceylon and Burma, as well as pearls from the Persian Gulf: all is there to celebrate an extraordinary jewellery tradition, remarkably refined artistic taste and perfected technique.

When the Mughal rulers rose to power in the 16th century, their master jewellers elevated their craft to an incomparable art form in its own right. The Mughals developed their own style and disseminated it across India from the first years of the dynasty, but it is to the fourth and fifth Mughal emperors that we owe the golden age of patronage when jewellers crafted marvellous creations that merged exceptional quality gems with both Eastern and Western art and culture.

In India, jewellery is about more than embellishment. Every gem has its own meaning that refers to a cosmic purpose or invokes a favourable horoscope. In popular culture, particular forms of jewellery suggest the rank, caste, region of birth, marital status or wealth of the wearer. Precious metals and gemstones have also been used in the adornment of courtly rooms, as well as in ceremonial dresses, weapons and furnishings.

The Venice exhibition is an incredible journey into the universe of Indian jewellery from the 16th century to the present day. The route is marked by the milestones of this art, which has never ceased to amaze and fascinate Western minds.

In the following video, at the time when the exhibition was at the Grand Palais in Paris, Amin Jaffer beautifully illustrates the romantic journey that one will experience by visiting the exhibition:

The exhibition opens with an evocation of the Mughal treasury, focused particularly on inscribed dynastic gems.

Visitors will be guided through the treasures of The Al Thani Collection as they admire the extraordinary assortment of dynastic gems, beginning with two particularly famous diamonds. They are The Idol’s Eye, the world’s biggest cut blue diamond; and Arcot II, one of the two diamonds given to Queen Charlotte – wife of King George III (1738-1820) – by Muhammad ‘Ali Wallajah, Nawab of Arcot (1717-1795). Both diamonds come from the legendary mines of Golconda.

These unique jewels are displayed together with emeralds and spinels, some of which are engraved with the names and titles of the rulers who owned them.

Mughal artistic taste is a key element of the exhibition, as is the dialogue the Mughals engaged with Europe throughout stylistic and technical exchanges beginning in the Renaissance. The strength of the bond between Europe and India is testified by the frequent use of enamelling in Indian jewellery, a technique inspired by Renaissance courts.

Jade and rock crystal were also highly prized at the Mughal court, and the second section of the exhibition displays some fascinating examples. In Islamic culture, jade was understood to invoke victory and was also believed to detect and counteract poison.

The Wine Cup of Emperor Jahangir, inscribed with verses of Persian poetry and the titles of the monarch, is considered the earliest dated Mughal jade. The Shah Jahan dagger (1620-1625) bears the title of the emperor inscribed on its blade while the jade hilt depicts the head of a youth, considered to be a masterpiece of Mughal courtly art.

Indian jades were also highly sought after in China. This can be seen, for instance, in an elegant cup made between 1660 and 1680, decorated with an ibex head and featuring an engraved poem written by Emperor Qianlong in the late 18th century.

Indian jewels are characterized by the use of very refined polychrome enamels and by the distinctive Kundan technique, which allows gems to be set in gold without the use of a prong. Instead, strips of malleable pure gold are used to fashion the mount, forming a molecular bond around the gem.

The third section of the exhibition will display a selection of artefacts made with these two procedures and coming from various regions of the Indian subcontinent.

One of these objects is the extraordinary Pen Case and Inkwell (Deccan or North India, 1575-1600), made from solid gold and encrusted with precious gems. Objects like this one were often used by high-ranking court functionaries to write imperial decrees and they are represented in many paintings. The object is a unique survival although images of this form are seen in contemporary miniature paintings.

Another masterpiece of this section is the tiger-head Finial from the throne of Tipu Sultan, made for the ruler’s accession to power. This gold-encrusted and gem-set throne was dismantled after Tipu was killed by British forces who conquered his capital at Seringapatam in 1799. Some of its components ended up in the British Royal Collection while others, like this finial, have resurfaced only recently.

Built around regalia and ornaments, the fourth section offers a variety of striking items, including a number of turban ornaments dating from the 17th to the 20th centuries. This part of the exhibition highlights expressions of power in a courtly context, whether under the Mughal influence or that of the East India Company and British Raj.

Visitors will be also able to appreciate an extraordinary collection of diamond necklaces and other extraordinary jewelled articles like the sword of the Nizam of Hyderabad and the fabulous Canopy that formed a part of the Pearl Carpet of Baroda, commissioned by Maharaja Khanderao Gaekwad between 1865 and 1870. The silk covering the deerskin is richly decorated with silver, gold, coloured glass, diamonds, rubies, sapphires, emeralds and around 950,000 pearls. This exquisite item was intended to be placed inside the tomb of Prophet Mohamed in Medina, but the gift never left for its destination.

It is then Europe’s turn to shine, with a selection of jewels from the leading Western houses, either designed for Indian princely courts or inspired by Indian jewellery. Visitors can feast their eyes on the sublime enamel peacock aigrette created by Mellerio dits Meller (Paris 1905) and bought by Maharaja Jagatjit Singh of Kapurthala.

Maharaja Bhupinder of Patiala was a particularly important patron and an idea of his taste is evident from the ruby choker made by Cartier for one of his wives. This section will also feature two of the most fascinating Cartier creations for Maharaja Digvijaysinhji – heir of Maharaja Ranjitsinhji of Nawanagar – a fine connoisseur of precious stones himself and a close friend of Jacques Cartier: the marvellous Tiger Eye, a gold-coloured diamond mounted into a turban ornament; and a remarkable Art Deco necklace made with rubies belonging to Nawanagar’s collection.

The exhibition closes with a tribute to contemporary goldsmithing thanks to a display of Indian jewels and European jewels inspired by the Indian tradition.

From his Mumbai studio, Viren Bhagat combines today’s materials and techniques with ancestral forms and motives. His works are placed side by side with Cartier and JAR creations that incorporate historic Indian gems.

A magical collection of unrivalled magnificence, an enchanting story covering five centuries of design and beauty, telling the story of the relationship between Eastern and Western culture and society, with all the symbolism, rituals and beliefs coming from the Indian world. CC

For additional information, and to experience an immersive 360 degrees exhibition visit, you are welcome to visit the Al Thani Collection website.

0 comments on “Exhibitions: the Al Thani Collection arrives in Venice”