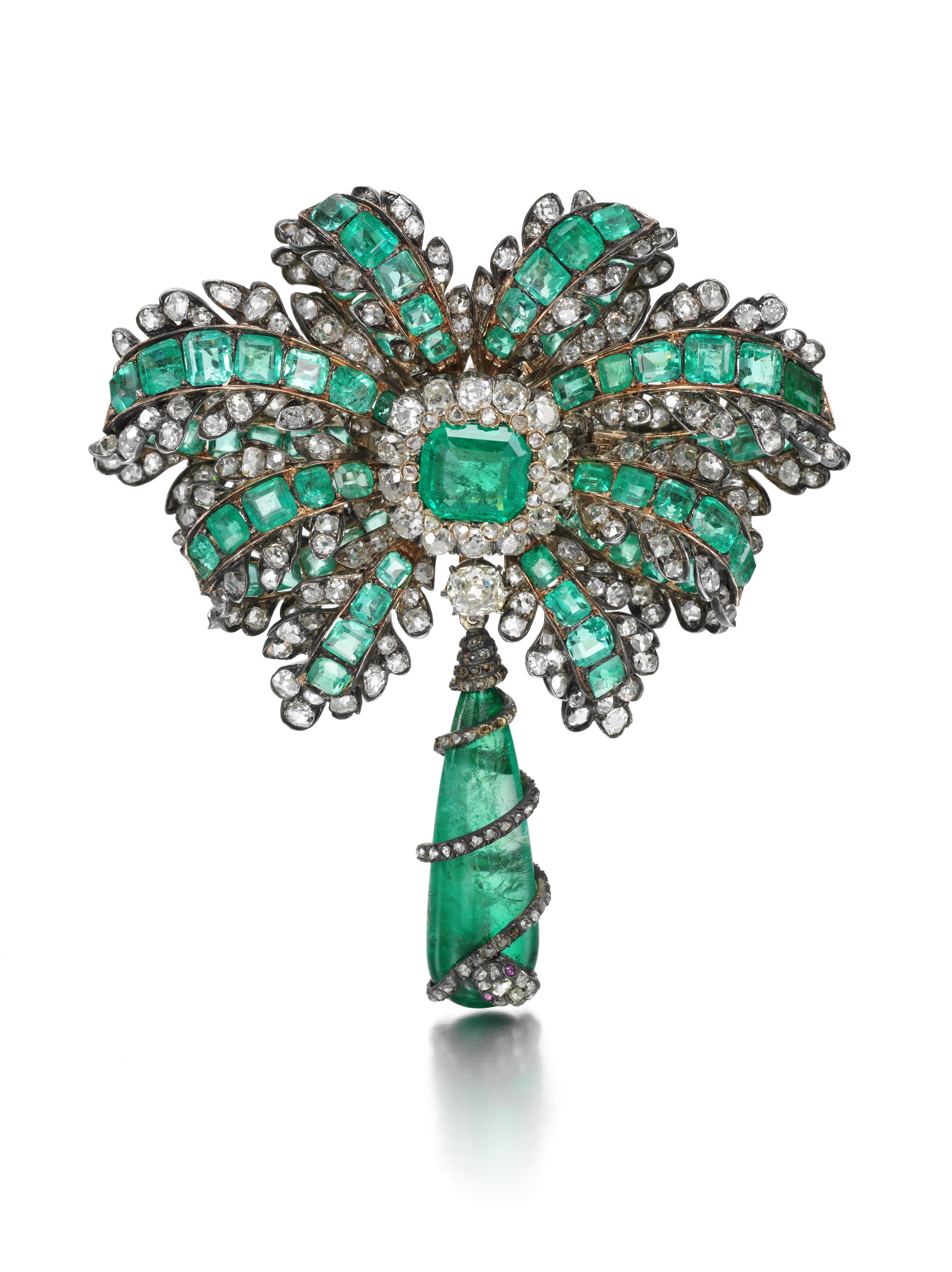 On 11 June 2015, Sotheby’s London sale of Fine Jewels will offer a wide variety of stunning jewels from the 17th century to the present day.

Renowned designers have often turned to the beautiful forms of nature for inspiration and this auction features remarkable designs from names such as René Lalique, Mauboussin, Ernst Paltscho and Vacheron Constantin, as well as pieces from great houses such as Cartier and Graff.

Floral motifs have always been popular with jewellers for their intricate forms and bold colours. Vacheron Constantin, known for its exceptional watches, is represented here by a yellow diamond brooch and striking pair of earrings each designed as a pair of flowers ave-set with brilliant-cut diamonds of yellow and near colourless tint.

Floral brooches are distinguished in the sale with their delicate designs, for instance a pair of gem set and diamond brooches, circa 1960, the first designed as a spray of wild roses, set with carved nephrite and rose quartz, each flower head set with a cultured pearl and brilliant-cut diamonds; the second designed as a spray of lily of the valley, set with carved nephrite and rock crystal, the flower heads suspending brilliant-cut diamonds.

Together with them is a sapphire and diamond brooch, of floral design, set with pear- and shield-shaped sapphires, circular- and single-cut diamonds, the stamen set with similarly cut diamonds of yellow and brown tint.

Art Nouveau jewellery is led by René Lalique designs from the early 20th century, such as a gold and plique-à-jour enamel chain of floral motifs, and a gold and enamel jewel bracelet. Adorned with scarab beetles and foliate motifs, this lovely bracelet was given as a gift from René Lalique to his daughter Suzanne Lalique, who then gave it as a wedding present to the current owner’s mother.

Art Deco jewels from the 1930s are exhibited by an exquisite hardstone, enamel and diamond bracelet, attributed to Ernst Paltscho. It was made at the time that Ernst Paltscho became famous for colourful carved hardstone jewels.

Cartier has long been at the forefront of some of the most important jewellery design trends of the 20th century and features strongly in the sale. Testament to the geometric design of the jeweller’s Art Deco period is a wonderful 1930s citrine and diamond brooch and ring. The brooch is of palmette design, set with step-cut and pear-shaped citrines of varying tones, accented with circular-cut diamonds.

The beauty and elegance of antique jewels is displayed through a wide range of pieces from the 19th century. Taking centre stage is the cover lot: a stunning Emerald, Ruby and Diamond Brooch from the late 19th century, of ribbon bow design with a detachable emerald drop, encircled by a serpent set with rose diamonds and cabochon ruby eyes.

A spectacular jewel from the late 19th century which also boasts aristocratic provenance is a diamond-set brooch portrayed as an eagle from The Estate of the late Marquess of Anglesey. Four similarly designed eagles are depicted on the Anglesey Coat of Arms.

Together with it we find a very delicate natural pearl and diamond jewel by Boucheron (circa 1901). Of foliate design set with natural pearls of grey and cream tint, millegrain-set with circular- and single-cut diamonds, to a later fine link necklace. The jewel is accompanied by a facsimile of a letter from Boucheron stating that the pendant was originally a brooch and was found in the archives from August 1901.

A diamond ring weighing 6.50 carats, featuring a cushion-shape diamond of exceptional colour and clarity (E, V52) is a highlight within an impressive selection of beautiful diamonds.

Modern, signed jewels are well-represented with examples from famous houses such as De Beers and Graff. From Graff, the sale features a pair of diamond ear clips set with brilliant-cut diamonds weighing 3.27 and 3.21 carats. From De Beers there are several jewels including a Diamond parure consisting of a bracelet and a pair of ear clips each composed of articulated and rotating flower heads set with brilliant-cut diamonds.

Evocative of Royalist fashion during the tumultuous era of the Stuarts is an impressive private collection of very delicate, late 17th and early 18th-century ‘Stuart Crystal’ and ‘Momento Mori’ mourning jewels. Emblazoned with skulls, skeletons and coffins, these jewels were widely worn to remind owners of their mortality.

They gained in popularity at the same time as the proliferation of Royalist ‘Stuart’ jewels, which were secretly sported by Royalists concealing portraits of Charles I after the regicide of the King in 1649.

Here below is a Gold ‘Stuart Crystal’ mourning slide from the 1690s. The oval slide containing a lock of hair applied with a skeleton resting on a tomb inscribed “Mem.Io.Mori” above the initials PC, beneath a facetted rock crystal cover, with loop attachments to the reverse.