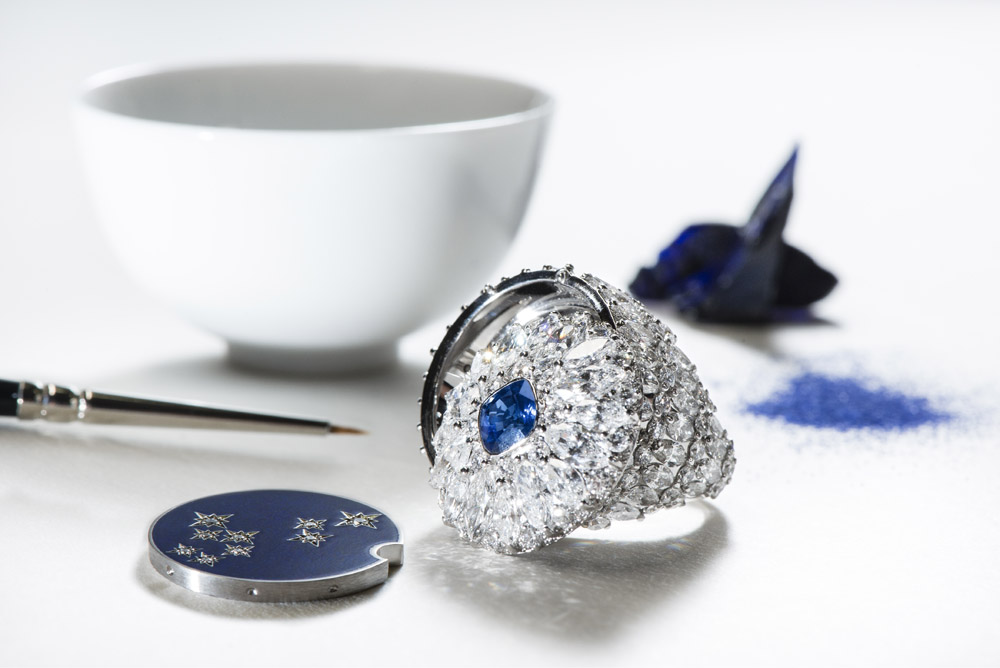 “Secrets & Lights – A Mythical Journey by Piaget” is the new Piaget Haute Joaillerie collection: a celebration of the silk route’s history and its vast ensemble of cities and cultures.

The driving inspiration comes from two legendary cities, Venice and Samarkand, which, chosen for their cultural wealth, architecture and creativity, provide a remarkable field of expression for the exceptional artisans in the workshops of the Piaget Manufacture. “Secrets & Lights – A Mythical Journey by Piaget” is an extraordinary collection, which comprises 93 jewellery and 38 timepieces(these latter to be revealed in September 2015), that provides a transcendent expression of the creative freedom cherished by the Maison.

Samarkand, the city which name means “Queen of the Earth”, is the first source of inspiration for the Secrets & Lights High Jewellery Collection, by inspiring the enchanting “Lights of Samarkand”.  This is the place where the magic of the Orient comes back to life, by revealing the vibrant colours of the Registan and the infinite expanses of the desert with its star-studded skies.

In their honour, the rarest and purest gems express the essence of Haute Joaillerie through splendid central stones. Exalted by the most unexpected Artistic Crafts, such as eggshell-inlaid lacquer, bulino engraving or micro-mosaic, these creations capture the majesty of the architecture and the desert animals.

Cascading feather-light turquoise beads bring the infinite beauty of the sky to a woman’s skin. In tune with the creative boldness cherished by Piaget (like in the Extremely Piaget collection), the radiant blue turquoise hard stones strike a fine colour contrast with emerald-heart flowers. Embodying original signature ways of wearing such adornments, the subtle asymmetry of the necklace (here below) accentuates its perfect harmony:

Placing the elements on the gouache painting.

Adjusting the central emerald on the gem-set motif.

Like ancient merchants who brought back the rarest gems from Samarkand, the gemologists from the Maison travel the world to discover those gems destined to become fascinating central stones, such as this four-leaved flower-ring featuring highly original shapes highlighted by a splendid Colombian emerald.

A flowing bracelet echoing enchanting arabesques and punctuated by turquoises illustrates the excellence the Manufacture can reach in gold craftsmanship. This noble metal, a Piaget’s favourite, and delicately chased using gestures akin to those of Haute Couture, is thus transformed into a jewellery sculpture – as supple as a precious fabric.

Prominent protagonists for more than half a century in creations by the Maison, prong-set marquise-cut stones light up an airy-designed necklace. The marquise cut that has become a Piaget signature is skilfully tapered here to make the light vibrate at the heart of each diamond, forming a scintillating lacework extended by a magnificent pear-cut diamond:

Venice, a serene and priceless cultural gem perched on the water inspires a collection imbued with a mysterious magic, where creations present themselves like timeless work of art: “Secrets of Venice”.

Magnified by virtuous exponents of feather art, enamelling and engraving, the jewels in the collection evoke the architectural splendours of the Clock Tower, restored by Piaget in 1997, the Bridge of Sighs, St. Mary’s Basilica and the city’s emblematic lion. Whether bringing to life the magnificence of Venetian festivities or reflecting the subtle plays of light, these High Jewellery creations become authentic masterpieces.

Reinvented to evoke the tunes of a masked ball, the signature cuff bracelet is adorned with a bird-flower by Nelly Saunier, feather artist, Master Artisan, laureate of the Prix de l’Intelligence de la Main (Prize for Intelligent Manual Craftsmanship) awarded by the Fondation Bettencourt Schueller. A flurry of feathers perched on an airy white gold base, forms a precious bouquet. Turquoise feathers delicately set among feathers shimmering with velvety shades of midnight blue create subtle glazed effects. An emerald placed at the very heart of this spectacular feather marquetry sparkles amid a constellation of sapphires and diamonds.

The equally innovative “secret” ring echoes the enigmatic figures of Venetian celebrations. Its sliding cover reveals a magnetic night blue sky crafted in Grand Feu champlevé enamel. Masterfully tamed by an engraver, the matter exudes a luminous sensuality on which the constellation of Leo has been traced.

The artisans of the Manufacture have captured the festive elegance of the city in a dazzling embroidery on the Palazzo ring. Its interlacing red spinel and diamond motifs evoke the flashing camera bulbs on the red carpet of the Venice Film Festival, or the royal box at the Teatro La Fenice. With their lines inspired by the Byzantine windows of the palazzos lining the Grand Canal, the long earrings with geometrically arranged rubies are entirely in tune with Piaget’s trademark creative boldness.

Like an invitation to engage in seductive games, a cuff bracelet adorns the wrist with pink gold embroidery. Its ballet of marquise-cut diamonds showcase the inimitable Piaget expertise, forming rays of light akin to those filtering through the stone bars on the windows of the Bridge of Sighs.

Artfully celebrating the many skills of Haute Joaillerie, “Secrets & Light – A Mythical Journey by Piaget” collection is endowed with the allure of a Venetian mask and the luminous beauty of the shimmering reflections dancing across the lagoon, together with the magic of the Orient, its vibrant  colours and the infinite desert with its intense starry nights.

New creations that set the crowning touch to Piaget’s stature in the field of Haute Joaillerie. CC

2 comments on “Secrets & Lights – A Mythical Journey by Piaget”